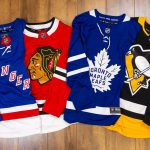 As teams are battling it out for the Stanley Cup Playoff posititions, we took a look at the top 5 selling NHL Jerseys of 2019. Did your team make the cut…

Falling into 5th place is the Penguins! An iconic team and followed massively in the NHL earning the fifth best selling Jersey in the league.

In 4th place is the New York Rangers! The Rangers were successful from the start in their early years, winning the Stanley Cup in 1928, 1933, and 1940. No surprises for why the jerseys are in the top 5 sellers of 2019!

Chicago Blackhawks make the cut at third! They have won six Stanley Cup championships since their founding in 1926.

In second place is the only NHL Franchise to be valued at 1 Billion, The Toronto Maple Leafs!

In first place would have to be Anaheim Ducks! Such an iconic team recognised by millions globally! The club was founded in 1993 by The Walt Disney Company as the Mighty Ducks of Anaheim, a name based on the 1992 film The Mighty Ducks. The Ducks have made the playoffs 14 times and won six Pacific Division titles, two Western Conference championships and one Stanley Cup, so no surprise for why they are USA Sport’s 2019 best selling Jersey!