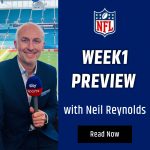 Each week through the 2021 NFL season I will highlight three things to look out for in the upcoming games. As we get set for the NFL’s ‘Biggest Season Ever,’ here are some major storylines and contests I will be firmly focused on during opening weekend.

I’m all in on Josh Allen as a bona fide MVP candidate for the Buffalo Bills and I think he is good enough to deliver a first Super Bowl crown to one of the most passionate fan bases in the league.

Allen will face a tough test in Week 1 as he meets a Pittsburgh Steelers defense that ranked third in yards allowed in 2020. But that won’t scare the strong-armed and mobile star as he went 6-0 against top-10 defenses last season, throwing 14 touchdown passes and just three interceptions for a rating of 107.6.

This game will be about much more than the Bills, of course. I will be keen to see which Pittsburgh Steelers team shows up in Week 1. The unit that opened the 2020 season with 11 straight wins or the group that lost five of six down the stretch.

Quick Stats on Steelers at Bills

Cleveland Browns at Kansas City Chiefs… Are the Browns for real?

I actually think that Cleveland are for real and will be a contender in 2021, regardless of the result at Arrowhead Stadium on Sunday night. Winning on the road against the Chiefs would be a real statement, but it may also be a step too far.

But Cleveland are well coached, have a true offensive identity with Nick Chubb and Kareem Hunt pounding away behind an elite offensive line, while Baker Mayfield does his best work at quarterback while on the move. The defensive improvements should also make a difference, especially the secondary additions of Troy Hill and John Johnson from the Rams.

All that being said, the Chiefs are a force and they have bolstered the offensive line that was a disaster in the Super Bowl. I fancy Kansas City to win this Sunday, but I also believe the Browns are going to be playing deep into January.

Quick Stats on Browns at Chiefs

One of the more fascinating contests of Week 1 will take place in Foxboro as the New England Patriots host the Miami Dolphins. And it’s not just because former Alabama quarterbacks Tua Tagovailoa (Miami) and Mac Jones (New England) will go head to head.

This is a battle of two well-coached, fundamentally-sound and physical football teams who could go in several directions in 2021. Both Miami and New England could be playoff contenders given the talent and coaching on their team, but I could just as easily see them being edged out in a competitive AFC. So, this early-season battle is going to be huge.

Tua has much to prove as he begins year two in Miami. He has much more talent around him but he also needs to be more aggressive and take more chances downfield. Jones has been one of the feel-good stories of the summer, displacing Cam Newton as QB1 in New England. While he actually has to play some games before we should get too carried away, Jones has looked the part in the preseason and has even been compared to TB12. That is dangerous territory. Let’s get the kid started first before we go there!

Quick Stats on Dolphins at Patriots

Tua Tagovailoa went 6-3 as a starter during his rookie 2020 season. But his quarterback rating of 87.1 ranked just 26th in the league.