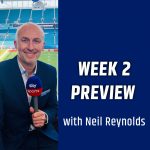 With Week 1 of the NFL season serving up a great deal of high drama and a few shocks along the way, several high-profile teams have left themselves facing big games already, even though we are only just entering Week 2 of the new campaign.

Here are three games that I think will serve up intriguing storylines in the coming days.

Buffalo Bills at Miami Dolphins… A bounce-back for the Bills?

As I have mentioned on various platforms and in various publications this summer, I’m a big believer in the Buffalo Bills and have picked them to win the Super Bowl at the end of this season. But they’ve got a tricky test coming up against the 1-0 Dolphins.

The Bills allowed a 10-0 lead to turn into a 23-16 home loss to Pittsburgh in Week 1 but more worrying than that slide was the offense’s inability to get going. Josh Allen missed on one sure-fire deep touchdown pass to Emmanuel Sanders and had several other downfield attempts broken up. He and the Bills have the talent to bounce back right away, but this is a dangerous opponent.

Miami mix things up on defense so much, they confound opposing passers without boasting very many superstars on that side of the ball and finding ways to win close games is becoming a very nice habit for Brian Flores’ men.

Quick Stats on Bills at Dolphins

The aerial power of the modern NFL will be on full display on Sunday night when the Dallas Cowboys – led by quarterback Dak Prescott – will take on a Los Angeles Chargers squad marshalled by exciting second-year passer Justin Herbert.

Dak looked fantastic in an opening night loss at Tampa Bay, throwing for more than 400 yards and there is no doubt this is his team now. Ezekiel Elliott will still have a role to play and the under-fire defense looks like it will have its moments with turnovers, but the Cowboys are going as far as Dak can take them.

As for the Chargers, they have their man in Herbert. I think he is going to be really special. He is only just getting started in his second year, but his play makes me look for Chargers games way more than in previous years. He can get this team into the playoffs this year.

Quick Stats on Cowboys at Chargers

Losing a close one in Las Vegas on Monday night means the Baltimore Ravens face an early must-win at home to Kansas City. They will not want to fall two games behind the Chiefs in the overall AFC rankings this early in the campaign.

But I have my concerns with the Ravens. Their pass protection was shoddy at times, Lamar Jackson lost two costly fumbles late in the game and the defense does not look anything like those we are used to seeing in Baltimore. This current group must have Ray Lewis spitting feathers.

As for the Chiefs, Cleveland showed there will be chinks in their armour but Andy Reid’s men showed they can score quickly and in devastating fashion. I think they will have too much firepower for an under-manned Baltimore D.

Quick Stats on Chiefs at Ravens