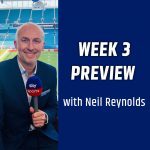 Strap yourselves in and get ready for another roller coaster ride that is a week in the National Football League. The twists and turns that must leave coaches and players stressed out to the eyeballs as some of the things I love most about covering this league, especially from the Sky Sports NFL studios for more than seven hours live on Sunday nights.

Here are three games that I think will serve up intriguing storylines in the coming days.

Both teams lost in Week 2 but I still feel good about the playoff chances of the Chargers and the Chiefs because they have absolute studs at quarterback in Justin Herbert and Patrick Mahomes. Watching this pair go toe to toe will be a real treat.

While Herbert his special – just check out some of his throws in the first two weeks of the season – the Chargers need to tidy up their game. There were too many drops in Week 1 and Week 2 saw two touchdowns wiped off the board with 12 penalties called against Brandon Staley’s men.

Quick Stats on Chargers at Chiefs

If Los Angeles is all about star power, then this game should be right up the alley of the City of Angels. Tom Brady heads to LA having thrown nine touchdown passes in two wins and has a wealth of receiving talent at his disposal. Staring him down will be a Rams D led by superstars Aaron Donald and Jalen Ramsey.

It will be just as star-studded when the Rams have the ball. Matthew Stafford is off to a hot start as Sean McVay’s new quarterback and Cooper Kupp is close to unstoppable. But Tampa also boast a very good defense, making for an intriguing battle.

Quick Stats on Buccaneers at Rams

Seattle Seahawks at Minnesota Vikings… Who bounces back from Week 2 disappointment?

The Vikings have been within inches of a 2-0 start to the season but find themselves winless. That has to leave them psychologically scarred, to some degree. And the Seahawks led by two touchdowns at home to Tennessee with 10 minutes remaining last week and somehow lost in overtime.

Neither side is looking particularly impressive on defense and that could make for an entertaining game with a lot of points. I expect both these quarterbacks – Russell Wilson (Seattle) and Kirk Cousins (Minnesota) to go bombs-away on offense. This may come down to one defense making just enough plays in a high-scoring outing.

Quick Stats on Seahawks at Vikings