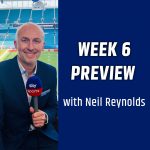 Like those famous red buses. You wait ages for one London game to come along and then two hit you at once. This weekend sees the Jacksonville Jaguars take on the Miami Dolphins at Tottenham Hotspur Stadium and I’m hoping two struggling teams can put on a great show.

I’ll be out at the stadium in the morning but won’t be covering the game on Sky Sports NFL. But we do have a couple of crackers and that’s where I’ll start my look at contests catching my eye in Week 6.

Los Angeles Chargers at Baltimore Ravens… Game of the year?

That’s a bold call this early into what is already shaping up to be a memorable campaign. But there is so much to love about this showdown between 4-1 teams who have every chance of representing the AFC in the Super Bowl.

The Chargers are so fun to watch with Justin Herbert at the helm and the second-year passer has made a start to his NFL career that puts him in the Patrick Mahomes and Dan Marino conversation. Despite missing one game at the start of 2020 and only being five weeks into 2021, Herbert has more 300-yard passing days (11) in the first two seasons of any player in history.

Add in Lamar and his outstanding form and this contest is as mouth-watering as they come. Buffalo and Kansas City will have plenty to say, but this could be an AFC title game rehearsal.

Quick Stats on Chargers at Ravens

Arizona Cardinals at Cleveland Browns… Can the Cards stay undefeated?

This is another good one on Sky Sports NFL as the 5-0 Cardinals take on a Cleveland team that is 3-2 but would not be a million miles away from 5-0 if a play had fallen their way here or there.

Kyler Murray and Baker Mayfield are former Oklahoma teammates, former Heisman Trophy winners and former first overall picks in the NFL Draft. Arizona’s Murray has been the hotter of the two quarterbacks in the season’s first five weeks, but Cleveland’s Mayfield is supported by the league’s best rushing attack.

I fancy the Browns to pinch this one on home soil but there is nothing to suggest the Cardinals are going to fade away. If they win this one on the road against another quality opponent, they are definitely for real.

Quick Stats on Cardinals at Browns

Geno Smith is back in the starting lineup in the NFL and while he played admirably last weekend, he is not Russell Wilson and the absence of their Pro Bowl quarterback could spell trouble.

Both these traditional powers are teetering on the edge through five weeks of the 2021 season. With 2-3 records and strong contenders above them in their respective divisions, there is little room for error for Seattle or Pittsburgh.

The Steelers also have some injury concerns with wide receiver JuJu Smith-Schuster gone for the year. But Pittsburgh have a much better defense and I think that proves to be the deciding factor in this one.

Quick Stats on Seahawks at Steelers