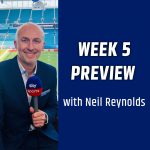 The NFL is back in London. By the time that first football is kicked into the air and the Atlanta Falcons take on the New York Jets, 707 days will have passed since we last enjoyed the sport we all love in our own backyard. That game is going to take a large part of my attention heading into the weekend but will be just one of four live contests we are airing on Sky Sports NFL on Sunday.

Leading with the London game, here are three contests worth your attention over what should be a memorable weekend.

Coaches don’t like to use the phrase ‘rebuilding’ because it offers up the thought that they are giving up on the current campaign. But there is no doubt Atlanta head coach Arthur Smith and New York Jets head coach Robert Saleh are looking to stamp their authority on their new teams.

I picked the Falcons to win this game earlier in the week, but the absence of Calvin Ridley could be a loss too many. I was also very impressed with the energy displayed by the Jets at practice on Friday given that they had just stepped off the plane. I think the Jets come out on top in a close one.

Quick Stats on Jets at Falcons

Green Bay Packers at Cincinnati Bengals… Are Cincy for real?

I know that Joe Burrow is the real deal at quarterback, but what about the rest of these 3-1 Bengals? Are they ready for the big stage that is taking on Aaron Rodgers and the Packers.

The Bengals are heading in the right direction and I feel they can hang with Green Bay for a while here, but I fancy the Pack to show their class and depth and come out on top. But if the Bengals do win to go 4-1 on the season, they will have my attention.

Quick Stats on Packers at Bengals

I cannot get enough of Justin Herbert and I think he is going to do very special things in Los Angeles for the next 15 years of what promises to be a glittering career. Taking on Cleveland’s second-ranked defense will be a challenge, but not an insurmountable one.

Herbert can do it all and if this comes down to a few key passes needing to be made here and there, I’m giving the edge to him and the Chargers. Cleveland will need to play good defense and run the ball well – both of which are their strengths – to win this fascinating contest.

Quick Stats on Browns at Chargers