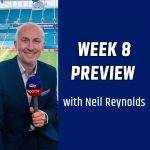 The 2021 NFL season rolls on and there are currently 11 teams across the two conferences who have no more than two losses to their names. That suggests to me that this race to the Super Bowl is going to be fierce and unpredictable. Here are three games that should keep the ghosts and ghouls at bay on Halloween.

This has become a sneaky-good game because the Colts are rounding into form, winning three of their last four after an injury-hit start to the season. But the Titans will still be favoured heading into this divisional contest because their form is even rosier.

In the span of six days, the Titans saw off the Buffalo Bills and the Kansas City Chiefs – the two combatants in last season’s AFC Championship Game. During a three-game winning streak that moved the Titans to an AFC-best 5-2 record, Mike Vrabel’s men have a 45-point differential over the opposition – third-best in the NFL since Week 5. They have averaged 32.7 points per game since Week 5, ranking fifth in the league.

This game will feature the two leading running backs in the NFL this season in Tennessee’s Derrick Henry (869 yards) and Indy’s Jonathan Taylor (579 yards). The latter will be vital in chewing up the clock and keeping the former on the bench and not on the field.

Quick Stats on Titans at Colts

New England Patriots at Los Angeles Chargers… Will Belichick have a plan for Herbert?

Bill Belichick’s dominance of rookie quarterbacks has been well documented over the years. Justin Herbert is not a rookie, but he is still young and only in his second season. Expect Belichick to mix up his coverages in order to cloud LA’s young passer.

That happened in Week 13 of last season when New England hammered the Chargers 45-0. I think there is a different air around these Chargers, though, and I remain unconvinced by the Patriots. There only wins this season have come against rookie quarterbacks, beating the Zach Wilson-led New York Jets twice and the Davis Mills-led Houston Texans.

Mac Jones has done some nice things in his first few games as a professional, but I don’t see him keeping pace with Herbert, even if Belichick does stamp some authority on this game. The Chargers will have too much firepower and can exact some revenge after last year’s thrashing.

Quick Stats on Patriots at Chargers

Cast aside by the Tampa Bay Buccaneers as they pursued and landed living legend Tom Brady, Jameis Winston has a chance to exact revenge on his old team now he is the starting quarterback of the New Orleans Saints.

New Orleans fared well against Brady last term, winning both regular season contests handsomely and leading 20-13 in the playoffs before the Bucs scored the last 17 points of the game on their way to Super Bowl glory. I’m not sure they can keep pace with Tampa Bay this time around.

Tom Brady leads the NFL in passing yards with 2,275 and the Bucs are averaging 33 points and 423 yards per game. That is going to place a lot of stress on a Saints D that ranks third in the NFL in points allowed and eighth in yards conceded.

Quick Stats on Buccaneers at Saints

Jameis Winston has a quarterback rating of 138.0 in home games this season, completing 72.1 percent of his throws with six touchdowns and no interceptions in the Superdome. That is the highest rating at home for any quarterback in the NFL this season