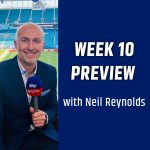 We’ve just inched past the halfway point of the 2021 season and that means a variety of media organisations have been asking me for my awards and potential Super Bowl matchups. I have no idea on the Super Bowl front. In fact, I felt more confident picking teams to play in the game in August than I do now having seen everyone play at least eight games. That is crazy, but true. This race to Super Bowl 56 is wide open. Like, really wide open! Here are three Week 10 games I will be following closely.

The Browns got back to winning ways in impressive fashion and now I am keen to see how their strong running game fares against an always-stout New England defense.

The Patriots have quietly moved into position for a stealth attack on the rest of the playoff field. Mac Jones is improving each week at quarterback, the running game is solid and the defense seems to come up with a timely plan every Sunday.

Both of these teams look more than capable of securing wild card spots in the AFC. I would say that Cleveland should have higher aspirations and they certainly have the better roster. But New England have Bill Belichick and momentum on their side. That makes this a tough one to call. I give the Browns a slight edge in a close one.

Quick Stats on Browns at Patriots

New Orleans Saints at Tennessee Titans… Trevor or Taysom to take on the Titans?

The Tennessee Titans are red hot as winners of five in a row, beating four playoff teams from last season on the bounce in Buffalo, Kansas City, Indianapolis and the Los Angeles Rams. Head coach Mike Vrabel has done a tremendous job in building a tough and resilient team in his image.

Without Derrick Henry in LA on Sunday evening, the Titans leaned heavily on a rising defense and found another way to win. That is going to have to be the way with their star man sidelined for at least the remainder of the regular season.

The Saints have a conundrum at quarterback now that Taysom Hill has returned from the concussion which has sidelined him for the past three weeks. Will he get another shot at the starting role he occupied for four games in 2020 or will the Saints stick with Trevor Siemian? The answer could impact the Saints’ playoff chances.

Quick Stats on Saints at Titans

Will the superstar quarterbacks return for this big clash in the NFC? Russell Wilson appears to be set for a return from the injury that has kept him out since midway through Week 5. Aaron Rodgers’ status is up in the air as he fights back from Covid-19.

The Seahawks need Wilson back as soon as possible because their season hangs by a thread at 3-5. And when he returns, it’s time to hand the keys to the attack back to their star quarterback; even though head coach Pete Carroll likes to stick with an underwhelming rushing attack.

The Packers will get another look at Jordan Love if Rodgers cannot go. Without Rodgers, Green Bay are a good team. With him, they are a bona fide Super Bowl contender. Love him or hate him, Rodgers is the main man in Green Bay and the key to their success.

Quick Stats on Seahawks at Packers