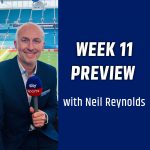 With Thanksgiving looming ever larger on the calendar and with the weather beginning to turn across America, it does feel like we are approaching the business end of the 2021 campaign. But, in reality, there are eight more regular season Sundays for teams to make their moves. And we are still waiting to see if anybody can separate from the pack in what has become the most crowded race to the Super Bowl that I can ever recall. Here are three key games on the slate in Week 11.

When the Bills make the kind of flashy plays that highlighted last week’s 45-17 thrashing of the New York Jets, we get drawn to their offensive stars. Josh Allen threw for 366 yards and two touchdowns and both Stefon Diggs and Gabriel Davis went over 100 yards receiving.

But the story of Buffalo’s 6-3 start has to be the defense that ranks first in the NFL in six major categories, including total yards, scoring and turnovers. The safety pairing of Jordan Poyer and Micah Hyde is as good as it gets and continue to make big plays.

The Colts will look for a safe, turnover-free approach to this game by loading up running back Jonathan Taylor and reducing the number of risks that Carson Wentz takes from the quarterback position. It might not be enough for a Colts team that has won four of its last five.

Quick Stats on Colts at Bills

At first glance, the NFC North division race is already over. Well, if the Packers have their way on Sunday, it will REALLY be over. The Packers are 8-2 which means they already have a healthy lead over the 4-5 Vikings, but what makes this game unpredictable is the fact that Minnesota blow so hot and cold.

You never quite know what you’re getting with the Vikings but if they get it going, Kirk Cousins, Dalvin Cook and the receiving duo of Justin Jefferson and Adam Thielen can do serious damage. Of course, that won’t be easy against a Packers defense that shipped just 34 total points to Kyler Murray, Patrick Mahomes and Russell Wilson.

Green Bay’s offense was sputtering last week, but Aaron Rodgers will continue to play his way back into shape and it will be fascinating to see how well A.J. Dillon fares in a primary role now that Aaron Jones is sidelined for a few weeks with a knee injury. I like Green Bay’s Super Bowl chances, but Minnesota could spring an upset here.

Quick Stats on Packers at Vikings

This has all the promise of being a mouth-watering affair at Arrowhead Stadium as the Dallas Cowboys bring the league’s number one offense to Kansas City to take on a Chiefs team that found the gas pedal with 41 points in Week 10.

Dak Prescott is in MVP form and surrounded by high-end talent in running backs Ezekiel Elliott and Tony Pollard; and receivers CeeDee Lamb and Amari Cooper. It’s difficult to envision a scenario in which the Cowboys get shut down, so the Chiefs are going to need to score their points.

Patrick Mahomes is still willing to take chances downfield and he was able to get Tyreek Hill and Travis Kelce back on track. This game could come down to which of the defenses can make the most plays or come up with a timely turnover. I’m backing Dallas but this one could genuinely go either way.

Quick Stats on Cowboys at Chiefs