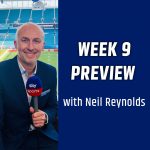 There is never a dull moment in the NFL. Since we last spoke, Von Miller has moved from the Denver Broncos to the Los Angeles Rams, Deshaun Watson has not moved at all, Aaron Rodgers is out of action with Covid-19 and Odell Beckham Jr. has been sent home to think about what’s he done by the Cleveland Browns. Add in one of the most exciting Super Bowl races in recent years and this season is turning out to be a headline-writer’s dream. Here are three games very much on my radar in Week 9.

The latest installment in the Battle of Ohio sees both the Browns and Bengals in major need of a win coming off toe-stubbing and disheartening losses to the Pittsburgh Steelers and New York Jets, respectively.

Injuries were the first thing to knock the Browns off track, but they are also now being undone by their own dysfunction. The rift between Baker Mayfield and OBJ escalated quickly and became a full-on volcano erupting all over Cleveland’s preparations for this big game.

All of that distracts from the fact the talented Browns are a major disappointment at 4-4. I think they suffer a further setback here. The Bengals are a bit too flaky for my liking but they can score points through Joe Burrow and Ja’Marr Chase and I don’t think Cleveland keep pace.

Quick Stats on Browns at Bengals

With Aaron Rodgers sidelined by Covid, Jordan Love will get a rare chance to offer a glimpse into Green Bay’s future. What he can muster against a poor KC defense that ranks 29th in the NFL is going to be fascinating to see.

The Packers have proven themselves to be a complete team so far this season, but the loss of Rodgers is a different matter, of course. With Kansas City looking to get back on track when they have the ball, this is going to be a fascinating focus on both offenses.

Patrick Mahomes and the Chiefs are being forced into a more patient approach and I think it is killing a quarterback who loves to make big and splashy plays. KC will have too much for Jordan Love on Sunday, but they are far from out of the woods and need to improve greatly to be a true factor this season.

Quick Stats on Packers at Chiefs

The shine has come off this Sunday Night Football encounter a little bit with Titans running back Derrick Henry out for a length period with his foot injury. But it will be fascinating to see if the offensive approach can stay the same with the 36-year-old Adrian Peterson now in the backfield.

Ryan Tannehill will likely need that to be the case. He has proven himself to be an excellent quarterback during his time in Tennessee. But, let’s be honest, there has been a great deal of defensive attention focused on Henry. And rightly so… the Titans have not won a game without Henry in the lineup since 2015.

The Rams have it all going on and are all in for Super Bowl success this season having traded for Von Miller. If he, Aaron Donald and Leonard Floyd get to pin their ears back and get after Tannehill because Tennessee are too pass heavy, that spells trouble.

Quick Stats on Titans at Rams