X
This site uses cookies to provide and improve your shopping experience. If you want to benefit from this improved service, please opt-in.
More Info
Accept Cookies
Bulldog Sports | BlogBlogEye on the NFL – Divisional Round Weekend
Menu 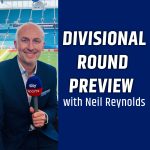 Eye on the NFL – Divisional Round Weekend

And then there were eight. Not that you will ever hear it referred to as such in the United States, but we are at the quarter-final stage of the NFL playoffs and the big guns from each conference enter the fray in the Tennessee Titans and the Green Bay Packers. With the games going largely to form on Super Wild Card Weekend, we’re set for some super-tasty matchups this Saturday and Sunday.

King Henry is returning to his throne and that could prove to be the major difference between two teams who are often more overlooked than they should be. Derrick Henry has not played since breaking his foot in Week 8. He missed nine games and still finished as the league’s ninth-best rusher with 937 yards and 10 touchdowns. I think Henry’s return boosts the Titans to the next round, but they do face a very serious threat in the form of Cincinnati quarterback Joe Burrow and his favourite target, Ja’Marr Chase.

Bengals at Titans… What you need to know!

The Bengals and Titans are looking to write their names in the NFL history books this season. They are two of 12 NFL teams never to have won a Super Bowl. The Bengals reached the big game in the 1981 and 1988 seasons, twice losing to San Francisco. The Titans lost to the St. Louis Rams in their only Super Bowl visit at the end of the 1999 campaign.

Football royalty will go head-to-head when the 49ers visit the Packers and the game will certainly have an extra-special feel with it being played at Lambeau Field. These two teams are among six clubs to have won at least four Super Bowls. The Niners have won five and the Packers have won the trophy named after their former coach, Vince Lombardi, four times. But if you add their 11 pre-Super Bowl era titles, the Packers have actually been crowned NFL champions 15 times.

49ers at Packers… What you need to know!

Packers quarterback Aaron Rodgers grew up in Chico, California, as a fan of Joe Montana and the San Francisco 49ers. Rodgers then played college football at California and dreamed of being the first overall pick in 2005 – a pick held by the 49ers. San Francisco chose Alex Smith and Rodgers went to Green Bay. He is 0-3 in the playoffs against his boyhood team, losing in the 2012, 2013 and 2019 seasons.

Both these teams have more than enough talent to go all the way to the Super Bowl, which will be played in the Rams’ SoFi Stadium in mid-February. Tom Brady knows how to navigate his way to a title game, but will the LA pass rush knock him off course? The Bucs are banged-up along the offensive line and here comes Aaron Donald, Von Miller and Leonard Floyd. That is where this game will be won or lost and I’m giving a slight edge to the Bucs. But only slight!

Rams at Buccaneers… What you need to know!

Tom Brady and Matthew Stafford combined for 775 passing yards, five touchdowns and no picks when these teams met in Week 3, a 34-24 win for the Rams. Brady threw for 432 yards and one touchdown while also, worryingly, leading the Bucs with 14 rushing yards. Stafford had one of his best games of the year, throwing for 343 yards and four touchdowns.

Hold onto your hats because this one could get wild with Buffalo’s Josh Allen staring down Kansas City’s Patrick Mahomes in a quarterback battle that could dominate the AFC for the next decade. Allen had more touchdown passes (five) than incompletions (four) last week and led Buffalo on seven touchdown drives out of seven in hammering New England. Mahomes threw five touchdown passes in a span of 11 ½ minutes to see off Pittsburgh. This could be your classic who-has-the-ball-last game!

Bills at Chiefs… What you need to know!

This will be the first time in NFL history that two quarterbacks who threw five touchdown passes in the previous week’s playoff game will face off. This pair are scoring machines. Allen accounted for 42 touchdowns passing and rushing during the regular season, while Mahomes was not far behind with 39.