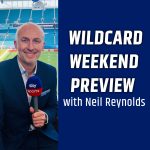 After the craziest and most unpredictable regular season, I can ever remember covering, the NFL playoffs begin on Saturday night and I’ll be hosting all six games live from the Sky Sports studios over the weekend.

Just 14 teams remain on the road to Super Bowl 56 and the action is going to be intense. Win and you move one step closer to the ultimate goal of being crowned champions of the NFL, lose and you have seven long months to think about where it all went wrong.

I’ll be in the studios for approximately 24 hours of live TV coverage on Saturday, Sunday, and Monday. I cannot wait to get started and here is a line and something you should know about each game.

This game will be about two quarterbacks making their playoff debuts in the Raiders’ Derek Carr, now in his eighth NFL season, and Cincinnati sophomore Joe Burrow. The Raiders are looking for their first playoff win since the 2002 season, the Bengals are chasing their first since the end of the 1990 campaign!

Raiders at Bengals… What you need to know!

Bengals quarterback Joe Burrow is the most-sacked quarterback in the NFL (51 times) and yet he leads the league with a completion percentage of 70.4% and has 15 touchdown passes of 30+ yards, the fourth-most in NFL history and the best since Randall Cunningham, of the Minnesota Vikings, in 1998.

These division rivals will meet for the third time in what is set to be the coldest playoff game played in Buffalo since the 1995 season. New England won 14-10 in miserable weather in Buffalo at the start of December while attempting just three passes. Buffalo won the return leg 33-21 on Boxing Day is something of a Josh Allen masterclass. Who makes it third time lucky on Saturday night?

Patriots at Bills… What you need to know!

Bill Belichick is 19-3 on the road against the Bills. With one more victory, Belichick would tie the legendary George Halas, of the Chicago Bears. Papa Bear won 20 games at Lambeau Field against the

Green Bay Packers – the most for any coach on the road against a single opponent.

A four-game winning streak in December and January was enough to power the Eagles into the playoffs, where they now face the defending Super Bowl champion Bucs. Tom Brady remains excellent at the age
of 44, throwing for 5,316 yards and 43 touchdowns. Philly needs to play keep-away with the league’s best rushing attack.

Eagles at Buccaneers… What you need to know!

Tom Brady has played in 45 playoff games, winning 34 of them and securing seven Super Bowl crowns.
The rest of the quarterbacks in the playoff field have appeared in a combined 44 postseason games with 24 wins and three Super Bowl victories. Breaking news… Tom Brady is pretty good at football!

Two of the most storied franchises in NFL history will go head-to-head for a place in the league’s final eight. The 49ers and Cowboys have 10 Super Bowl crowns between them, each winning the NFL title on five occasions. This promises to be a star-studded affair and I’m not talking about the Cowboys’ logo.

49ers at Cowboys… What you need to know!

These teams are in form, both winning four of their final five contests heading into the playoffs. Two of San Francisco’s four wins came in overtime (at Cincinnati and at Los Angeles Rams).

Even Steelers quarterback Ben Roethlisberger has been joking this week about nobody giving Pittsburgh a chance. Can they overturn a comprehensive 36-10 loss to the Chiefs suffered at the same venue on Boxing Day? It’s going to be a tough task and would need to be THE strangest thing to happen in this strangest of seasons.

Steelers at Chiefs… What you need to know!

There is some familiarity with the Chiefs in the playoffs as they chase down a fourth consecutive appearance in the AFC Championship Game (they have been there every year in which Patrick Mahomes has been the full-time starter). Kansas City lost to New England in the AFC title game in 2018, were
crowned Super Bowl champs in 2019 before losing to Tampa Bay last year. They will have to go a longer route this time around as Mahomes gets set to play in his first wild card game.

These NFC West rivals will meet for the third time this season. The Cardinals won in LA and the Rams won in Arizona. Both teams are loaded with talent but cannot be trusted. Arizona was the first NFL team to have 10 wins this season but have reversed into the playoffs by losing four of five.

The Rams blew a 17-point lead against San Francisco last week, ending their winning run at five. Now, they face a tougher route to the Super Bowl in their own stadium.

Cardinals at Rams… What you need to know!

The Cardinals will be glad to be on the road in the playoffs. They have lost five straight home games while posting an impressive 8-1 record on their travels this season.

The Rams have won nine of the last 10 meetings between these division rivals.