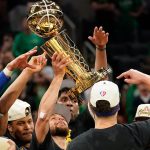 The Golden State Warriors are the 2022 NBA champions after defeating the Boston Celtics 103-90 in game six of the finals.

Steph Curry was at his dominant best for the Warriors, scoring an equal game-high 34 points on the back of six three pointers.

He also tallied seven rebounds and seven assists, and was named the Finals MVP for the first time in his career.

Draymond Green finished two assists shy of a triple-double in his best game of the series, while Andrew Wiggins again played the perfect side-kick for Curry with an 18-point effort.

The Celtics opened the game on a 14-2 run, but were ultimately let down by 22 turnovers which left them unable to sustain any momentum.

Jaylen Brown had 34 points for the home side, with Al Horford contributing 19 points and 14 rebounds.

The result marks Golden State’s fourth NBA title in eight years, its seventh in franchise history and comes just two years after they finished with the worst win-loss record in the league.

The Warriors struggled in the early going, making just one of their first six shots, but were eventually able to capitalise on Boston’s poor ball handling to close out the quarter on an 11-0 run.

Golden State maintained that momentum into the second quarter, extending their lead to 19 en route to a 54-39 half-time advantage.

The third quarter opened with a flurry of threes from both sides, before Al Horford sparked a much-needed 16-4 run for Boston to give themselves a glimmer of hope heading into the fourth.

However it was not meant to be, as Curry took control down the stretch to add a new page to the Warriors’ dynasty.